"Williams's charming text teaches the importance of imagination and perseverance... Karas's sunny spreads are as warm, fresh, airy and magical as the tortilla."
Kirkus Reviews

"Preschoolers will want to join in the chanting and clapping... the repeated action and tension make for a fun read-aloud."
Booklist 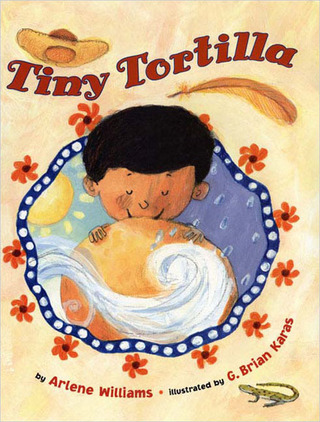 Juan Carlos is dreaming of a hot, tasty tortilla for lunch, but the old tortilla maker in the plaza has sold them all. She has only a scrap of dough left—and it is muy pequeña. She tells Juan Carlos she must pat the dough and sing:

When the dough is light and thin, he must give it three more pats: uno, dos, tres. And he must NOT take a bite until it is done. It is very hard to wait, but Juan Carlos soon learns all that a tiny tortilla can be.

This original tale of unexpected magic is as refreshing as rain in the desert. With a read-aloud text and whimsical pictures, with Southwestern folk art, this is a satisfying book about how the ordinary can turn into the extraordinary.

"Young Juan Carlos has been weeding his garden all morning, but when he gets to the town plaza to buy his lunch from the tortilla woman, she's all sold out. However, she has a tiny bit of masa left, so she teaches Juan Carlos how to pat the dough... When you think it is ready, she says, give it three more pats. Juan Carlos goes off to do so, and discovers the masa is more than it seems. It turns into a floppy sombrero to cover him while he naps, a boat to carry him through the arroyo when it rains and a huge feather to carry him on the wind. Each time, he has to re-make the tortilla, until finally it becomes hot (like the sun), fresh (like the rain) and soft and airy (like the wind). Williams's charming text teaches the importance of imagination and perseverance (and following cooking instructions), and Karas's sunny spreads are as warm, fresh, airy and magical as the tortilla."
Kirkus Reviews

"Young preschoolers will want to join in the chanting and clapping action in this picture book story about a small boy who makes big transformations. Hungry from his work in the hot desert garden, Juan Carlos wants a tortilla, but the old woman in the market has only a tiny piece of some special masa. She tells him to be patient, to pat the masa flat and not to take a bite until he has counted three more pats. He follows her instructions several times, and each time he sees the tiny piece soar into a magical object—a sombrero, a feather, a boat—until at last it grows into the best tortilla ever. Karas's warm colored pencil pictures in a lively folk art style evoke a southwestern desert setting where magic can really happen, and the repeated action and tension make for a fun read-aloud."
Booklist

A Year With Winker Leafkin
This book shares twelve exciting adventures of Winker Leafkin as this tiny elf plunges headlong into trouble and magically finds his way out again. Each story relates to a month of the year and many relate to holidays.

Simmie... With Secrets
A historical mystery about an alley girl named Clare who must solve the mystery of who she really is and what has happened to her mother who has gone missing.

A Fire in the Night
An exciting tale of friendship and overcoming loss for the younger reader.

Tales from the Dragon's Cave
Twelve original fairy tales which explore the magic of peacemaking.

How to be a Dragon... without burning your tongue
A young teen finds herself turning into a dragon... scale by scale, claw by claw.

Dragon Soup
An exciting tale of a girl's wise solution to a dispute between two Cloud Dragons.

Tiny Tortilla
Juan Carlos's day turns into a great adventure when a tiny ball of masa, given to him by the old tortilla woman, becomes much more than he ever imagined.

Winker, Buttercup and Blue
A wonderful springtime adventure for 2nd to 5th grades.